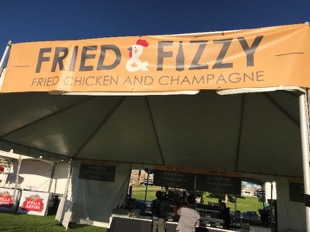 (SCOTTSDALE, Ariz.) It was incubated at this year’s 2017 Bentley Scottsdale Polo Championships. And after an 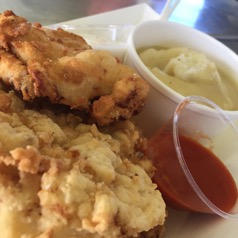 extraordinary debut it is being launched as a stand-alone venture by polo owners and M Culinary Concepts, the operator and Valley’s largest catering company.

“We thought it was going to be a hit with the big polo crowds but it was so much so that we are booking Fried & Fizzy at more public and private events, and we are actively looking to buy a food truck that we hope to have retrofitted and on the street by spring,” said M Culinary Co-Founder and Chief Culinary Officer Chef Michael DeMaria. DeMaria said the food truck investment would be a first for his well known company.

The idea was originally crafted by Bentley Scottsdale Polo Championships Co-Founder Jason Rose who read about an emerging trend in the south a couple of years ago combining fried chicken and champagne. Rose, who likes to debut unusual elements at the annual Polo Party, approached M Culinary about the concept after the 2016 Championships, and together they launched it at this year’s event. 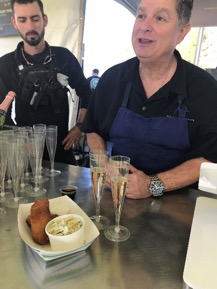 Rose, along with Jennifer Moser, who co-owns Rose+Moser+Allyn Public & Online Relations, will handle marketing for the endeavor. Those efforts will be bolstered by Mandy McGee, who recently joined the public relations company after serving as a General Manager for LGO Hospitality, one of Arizona’s top restaurant groups.

Rose and Moser said it didn’t hurt that fried chicken is among DeMaria’s favorite dishes, and one he has always been interested in exploring as a chef. The pairing also made sense as M Culinary holds a liquor license allowing the caterer to sell champagne as part of food truck packages for private events, a rarity in the business, and at festivals and public events with a Special Event Liquor License.

This is Rose’s first entry back into the food sphere since creating and launching the politically-themed “Nixon’s at the Esplanade” in the late 1990s. And it will be M Culinary’s first foray into the food truck business. The company currently holds some of the state’s largest catering contracts including those for the Waste Management Phoenix Open, Barrett-Jackson Collector Car Auction and is the master concessionaire for food and beverage operations at WestWorld of Scottsdale.

DeMaria said Fried & Fizzy’s next event would be February 10th in Paradise Valley for a private event by Cullum Homes at its Village of Mountain Shadows.

Groups, events and individuals interested in booking Fried & Fizzy should do so by calling Mandy McGee at (303) 551-5315 or emailing at mmcgee@rosemoserallynpr.com.