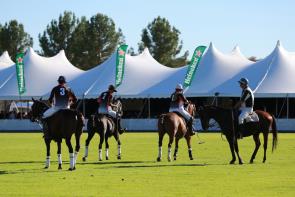 (SCOTTSDALE, Ariz.) – On Saturday, October 24th, nearly 12,500 spectators attended the Bentley Scottsdale Polo Championships: Horses & Horsepower, taking in all of the sights and sounds of the “world’s most interesting polo event.” This year’s attendance set a new one-day record. 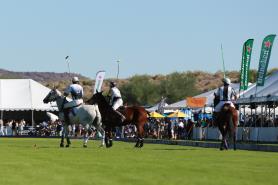 The day’s festivities included more than just polo. Fans also took advantage of The Canine Couture dog fashion show, the Larsen Art Gallery LIVE Art Auction, the World’s “Longest” Catwalk Fashion Show, and a preview of the world famous Barrett-Jackson Collector Car Auction. It also featured ballroom dancing field side for the first time ever, as well as a Phoenix Symphony quartet performance along with play, and a High Tea Tent by The Phoenician. This year also saw the debut of the Triyar Ivy League Lounge, packed throughout the entire day with over 1,000 people dancing and drinking in a nightclub like atmosphere.

The first match on Saturday began at 11:00 AM with Barrett-Jackson Automobile Auction Company Chairman and CEO Craig Jackson making the first drop in the match between Polo Azteca and Club Polo Cabo, presented by One & Only Palmilla of Los Cabos, Mexico. In that match, Club Polo Cabo beat Polo Azteca, 9-8, and was led by the play of team founder Tony Yahyai. 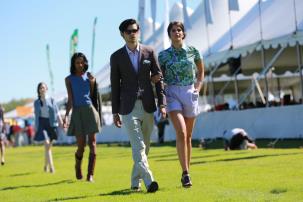 In one of the most unique elements of the day, the Phoenix Symphony provided the musical backdrop to one of the featured match’s chukkers. Fans were regaled with classical music all while witnessing the two teams take on one another.

“Even though we weren’t able to defend our title, the Bentley Scottsdale Polo Championships have become one of my favorite polo events to compete in,” said Clogau Wales Polo Team captain Ricky Cooper. “It was a great crowd and we enjoyed ourselves fully.” 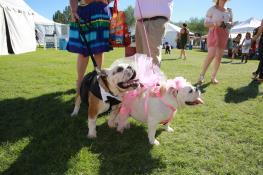 he polo field. More than 30 of Arizona’s most fashionable dogs participated in The Second Annual Canine Couture: Presented by Applewood Pet Resort & Bark Avenue. The World’s “Longest” Catwalk Fashion Show, produced by Phoenix Fashion Week, presented more than 100 models showing off the latest in top brands and fashion in Arizona. Fans also witnessed plenty of “horsepower” with a preview of the Barrett-Jackson Collector Car Auction, which will be held at Westworld of Scottsdale on January 23-31, 2016.

The 2015 Larsen LIVE Art Auction, held in the Picasso Pavilion, was also very successful. More than 700 bidders from 45 states and 25 countries registered to participate in the Southwest’s largest contemporary live art auction. Sales of artwork from the auction entered seven figures for the first time.

For more information on the 2016 Bentley Scottsdale Polo Championships, scheduled to take place on November 4, 2017, or to discuss tickets, tables or sponsorships, please visitwww.thepoloparty.com.